As part of this role, he will be leading a team of highly qualified professionals to provide the best environmental solutions for South Asian countries

Quick Fact: David Malpass is the President of World Bank

He was the only Indian among 16 modern Olympic history legends chosen by the International Olympic Committee.

He held an unbeaten record of scoring most goals by an individual in the Olympic men’s hockey final.

Quick Fact: 1928 to 1956 is considered the golden period for the Indian Hockey team at the Olympics

The police force in the Ladakh Union Territory will now be called LADAKH POLICE.

The force will will have its new symbols, insignia, formation sign for a new identity

The logo will include the letters LP in symmetric design and juniper leaves covering the Ashoka and LP.

The red and blue Ladakh police flag will have ‘Khidmat aur Himmat’ written on it.

CRISIL has predicted the economy to shrink by 5 per cent in the current fiscal because of coronavirus lockdown.

The primary reason for each of these three recessions has been a monsoon shock.

Quick Fact: Recession is typically recognized as two consecutive quarters of economic decline, as reflected by GDP and other monthly indicators

Quick Fact: IMD’s color-coded warnings regarding the intensity of the weather system is green, yellow, orange and red (in ascending order) 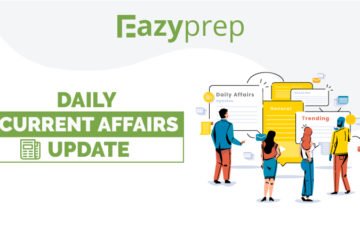