Parts of speech are the basis of grammar. Every grammar question you attempt in your exam, usually comprising more than 50% of the verbal ability section, will depend on your basic knowledge about parts of speech.

How many sentences have you spoken till date? And how many have you written and heard? It’s uncountable, right?

Well, it’s amazing that every thought we have, every word we speak, every speech we hear consist of only eight types. The eight parts of speech. Let’s quickly find out what they are.

Well, I usually see the eight parts of speech as a family. The main members of the family are a brother, Noun, and his sister, Verb. Let’s see who they are:

Now both noun and verb have their own family members. Let’s meet noun’s family first.

Let’s meet Verb’s family now. Hers is much smaller.

And then we have some other relatives. Let’s meet them as well.

So there you have it. This is the Grammar Family of the Eight Parts of Speech.

EazyTip: Creating logical structures and picturising things will help you remember them. So here’s the Grammar Family in totality:

Note: Articles are not technically considered a separate part of speech, because they define nouns (for example: A man, The movie), and are hence adjectives.

Let’s look at how they make up all components of what we speak, hear, write and think with a few examples. Here are the components as we have discussed above.

Hurrah! The great king Ashoka won the battle of Kalinga. He is leading his army and after fighting bravely, they are now moving forward.

Let’s check how this sentence is made up of parts of speech:

All covered? Well our point is proven. Everything we say is made of the parts of speech.

You will learn more about individual parts of speech in the following chapters. But for now, do attempt the questions and exercise given below to check your understanding of the chapter. 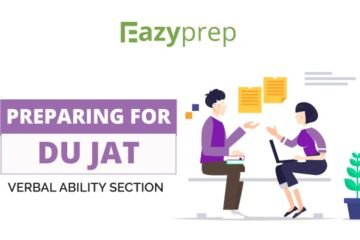 Appearing for the Delhi University JAT and still don't know how to prepare for the DU JAT verbal ability section? Read all the details here.